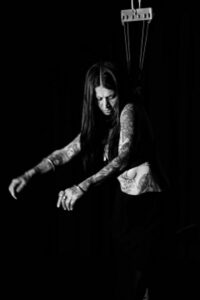 Noema Pasquali – also known under the pseudonym Tiger Orchid, used mainly as a Freak Shows performer – was born in Italy in February 1978 and currently lives and works in Berlin.
Her training in the Esoteric field began at the age of 13, while at 20 she was initiated into Tantrism and Kundalini Traditions – which subsequently inspired her in following the vocation to Fakirism as a spiritual practice, Noema was the first woman in Italy to devote herself to this discipline – at the same time She continued her academic and humanistic studies, graduating in Political Sciences, specializing in Sociology of Art and Literature, Semiotics.
In 2018 – after more than 10 years – she decided to definitively abandon her work as a piercer and devoted herself completely to her vocation as a Healer, Esotericist and Educator, she also definitively abandoned the context of the Freakshows, definitively aligning her Art – in particular Body Art. – to ritualistic, psycho-magic, and the recovery of folkloristic narratives.

“I worked as a piercer for more than ten years! I grew up without a family and I started working at 13, I was poor but I had a lot of ambitions; I started working in the world of piercings and tattoos because that environment represented for me a valid alternative to a bigoted and capitalist society. But my goal has never been to be the best among the piercers, I was simply very good at my job, because I am a person who is dedicated and committed to what She does ! My aim has always been to continue my studies and work as a Healer, Educator and Artist, I am a Spiritual Entrepreneur! ”